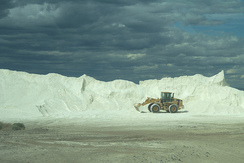 What is Diatomaceous Earth?
Diatomaceous Earth is the fossilized remains of ancient algal shells called Diatoms or Phytoplankton. Diatoms are the grass of the waterways of the planet. Much in the same way grass is the staple food of land based herbivores. Diatoms (algae) are the foundation basis of all aquatic life and form the most plentiful group of individual species known to man. There are more types of Diatoms in the world than all land plants combined.

The Diatoms living in the waterways absorb minerals and elements from water enabling them to ‘build‘ their tiny shells. Consequentially, the fossilized remains have captured and contain the some 15 trace minerals used to form the shell. As they die the microscopic diatoms drop to the bottom of the waterways and form deposits of essentially marine sediment.

How Does Diatomaceous Earth Work? 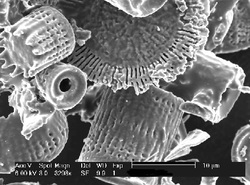 Examined  under a microscope and magnified 7000x these tiny diatoms appear as spiny honeycombs or tiny cheese-grater like cylinders. These microscopic cylinders are extremely hard and sharp. On the hardness scale, diamonds are 9, DE is 7, insect exo-skeletons are typically rated a 3.
The upside of which is when insects (ants, fleas, flies, cock-roaches to name but a few) come into contact with DE it ultimately kills them. The tiny particles of the sharp and hard DE stick to the insect, abrasively rub through and serrate their epi-cuticle and joints, absorb their bodily fluids and they die of dehydration. This process is purely mechanical not chemical. As such there is no build up or chemical residue, the insect cannot build up immunity or become tolerant to it. There is no plant or livestock with-holding period for human consumption.

DE is death to bugs – every-time! However, the insect must come into contact with DE in order for it to work. As a result Fossil Shell Flour is used extensively overseas in domestic and commercial applications as a natural insecticide with OMRI organic registration

Despite Fossil Shell Flour having a debilitating and eventual fatal effect on bugs and insects it does not harm its warm blooded host and has no negative impact on mammals.

Poultry, Pets and Livestock can be dusted or brushed in DE as a chemical free aid to rid themselves of external parasites such as fleas, ticks, mites and lice.

As well as external parasites it also has positive benefits on internal parasitic control for poultry, farm animals, domestic pets and equestrian applications. Fed daily the hard and sharp honeycombs of the DE lacerate internal worms to which they release their grip on the intestinal walls and get passed out with the rest of the waste.

In addition to this beneficial impact on internal parasites DE cleanses and almost ‘polishes’ the colon and intestinal passages at the same time. This polishing effect removes excess mucus and bad bacterial build-ups internally which may have occurred over time. This provides a greater ability to digest and absorb the feed nutrients being provided. Improved feed conversion, greater weight gains, improved immune systems and overall health are often on the list of positive changes noticed by farmers and users alike.

How to use Diatomaceous Earth on Pets

Discourage fleas, ticks, mites and lice that can be a nuisance around the home as a result of household pets.

Apply thoroughly but lightly - DE is a desiccant which means it has a drying effect.

Dust DE in and around beds, within bedding, kennels, baskets, perches in and around the home where blood-sucking parasites may be present. Pay particular attention to areas your pets spend a lot of time or parasites are likely to be. Apply regularly for best results. It has been quoted that the fleas that you actually see are only 10% - 20% of the population. Severe infestations may require additional natural control methods in conjunction with DE.

For inside pets, DE can also be sprinkled into your household carpet in light and even doses. Leave for a couple of days before vacuuming. Be
cautious with the application, too much has been reported to clog up certain vacuum cleaners.


Applied to kitty litter boxes DE will assist moisture absorption, odour control and reduce attraction by flies.Diatomaceous Earth will not harm mammals or your avian friends. Avoid the eyes as DE will dry them out and be uncomfortable. Areas that may benefit from drying out, such as hot spots and irritable areas can be dried with a light application of DE.

DE may be added to pet food to improve its texture and palatability to dogs, cats and pet birds.